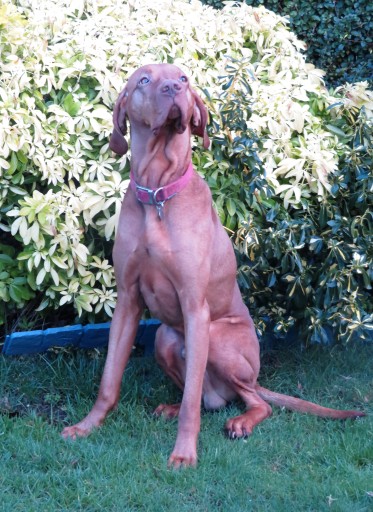 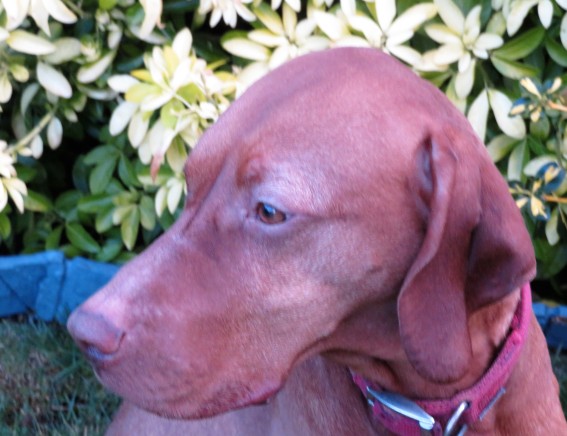 HERBIE BECAME A FATHER ON 3RD FEBRUARY, 2019 TO THE LOVELY NALA – 4 BOYS & 5 GIRLS.  HAS PROVEN TO BE A SUPERB STUD DOG, SIRING LARGE LITTERS.  A NO NONSENSE STUD DOG JUST GETS ON WITH THE JOB IMMEDIATELY IF BITCH IS RIGHT ON TIME & THEN JUST ACTS THE SAME LOVING CHILLED OUT/LAID BACK DOG AFTERWARDS!  NOTHING WORRIES HIM & TAKES EVERYTHING JUST IN HIS STRIDE LIKE HIS FATHER DANTE!  VERY EASILY HANDLE!

Herbie is my 4th generation Autumnglory Vizsla son of Dante, grandson of Kristo and great grandson of Monte my foundation boy!  He is owned in Joint Ownership but will carry on my good Autumnglory Breeding being available for stud now a proven stud dog.    Herbie is 4 years old and in top fitness/health condition often walking 20 miles a day perfectly!  Has the same beautiful gentle loving nature as all my boys and is of good height but finer featured than mine were but has good sized well boned Autumnglory Genes in him!  No health issues and has been DNA Profile Tested etc.  As being an older dog not suitable for hip scoring which is done usually at 1 year but his littermates have perfect low scores of 3/2 despite Dante had one high hip but the other perfect!

Herbie’s father Dante was DNA Tested for Cerebellar Ataxia – result NOT AFFECTED but as Herbie is due to become a father has also been tested too!

Herbie as like all my Vizslas has been DNA Profiled by the AHT!

Herbie has also been like his father Dante DNA Tested for Cerebellar Ataxia – CLEAR BOTH SETS OF GENES!

Herbie has a lovely head and kind expression and of my good Russet Gold colour and is on my Champdogs Page under Autumnglory Vizslas.  He is a perfect text book stud dog!

Herbie has now been mated to the lovely Nala a beautiful bitch here in Edinburgh her first litter.  She will be scanned but puppies should be due around end of February homed for March/April 2019.

Seen here with Herbie and Nala’s Pedigree a complete out cross.  Already a waiting list started and will have my Autumnglory Name on the puppies – a one off rare litter!